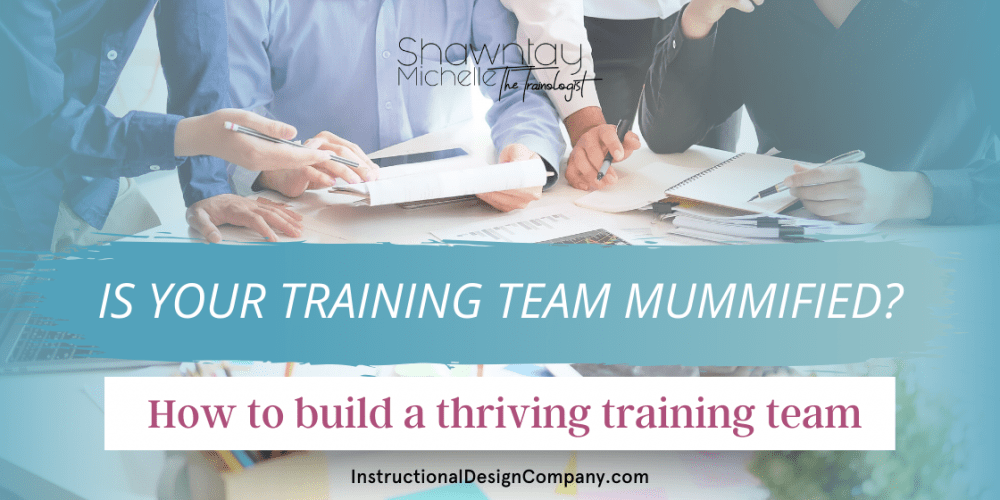 Hey Training Manager, is your Training Team mummified? Think about that for a second. What does it even mean? Maybe I spent too much time in the Halloween section of the store this weekend or maybe we have something to talk about.

When you think of a mummy, what do you think of? Probably something like a shriveled up, dried up person wrapped up in some cloth moaning and groaning as they stumble forward. Is that what you think of?

If you answered yes, you have a team, or at least a team member, that is or is becoming mummified. And, I don’t know about you but mummies creep me out.

So, a mummified Training Team is one that is not growing, not learning, not adapting, and lacks individual ownership.

Why does this matter? Other than the obvious, let’s talk about Learning Ecosystem competition.

There is so much out there to serve the needs of learners and much of it is free or low cost, which competes with the value of your training team.

Basically, if somebody wants to learn something, they can usually find something online with a few clicks or swipes.

And, it doesn’t stop there. There are so many vendors out there who provide professional training services, which could replace your team.

Teams who don’t change are at risk of becoming irrelevant…fast, if they aren’t already.

So, what are the signs of a mummified training team?

YOU KNOW YOU WANT SOMETHING FREE!

Signs of a Mummified Training Team

If you have heard phrases like “that’s not my job” or “I don’t know how to do that, so you will have to find someone else” from the members of your training team, I’d be worried.

If you have team members who don’t jump in to support and help one another or who try to shine by stomping on the work of others, I’d be worried.

Why would I be worried? I would be worried because these are signs that individuals are not 1) invested in doing great work; 2) continuing to grow and develop in their skills; or 3) being a team contributor. Instead, they are just stumbling along and most likely moaning and groaning as they go.

Another worrisome sign is lack of ownership. Hearing things like, “I sent Joe the training two weeks ago and have heard nothing back“ makes me visualize a mummy with arms extended out and stumbling directionless. No brain. No accountability.

Personally, this drives me crazy. I have worked with people who treat accountability like a “hot potato”. Did you ever play that game in elementary school?

You know the one where you pass the ball around super-fast trying to get it out of your hands because it is a “hot potato”. I have seen countless people pass around projects, not just training projects, like we did in our elementary games of Hot Potato.

Your team members who are accountable will hold onto the “hot potato” until it is fully baked. They will keep checking on it until it is done. This is what ownership looks like. This is what you want and need on your thriving, results oriented training team.

Been There. Done That.

I must confess that I have worked on and led mummified training teams. And, O.M.G, it was painful and hard to fix. In fact, your colleagues just might look at you like you are the problem when you start trying to fix the problems on your team.

People who don’t have initiative or who don’t like change or who aren’t team players, will scream their head off to everyone who will listen about how terrible you are and the mess you are making.

Anyone who has ever said leading a team is easy was wrong. You’ve got to lean in and dig in to fix the problems. Trust me, you and the team will come out stronger on the other side, if you do.

Let me tell you about Lynn and Victor (these names are made up but the people are real).

Several years back, I went to work for an association in Dallas and Lynn was a part of my team. On my very first day in my very first meeting with Lynn, she told me she would never listen to me or anything I had to say because she had more than 20 years’ industry experience, and I didn’t.

GET TRAINING FOR LYNN!

She had industry experience, and I had learning program development experience. We could have made a really great team, but she made it clear that I had nothing to offer and she wasn’t listening.

I didn’t handle the situation well. In fact, I did the worst thing I could have done. Nothing. Nothing at all. I was a new director at the time, and I wanted to make a good impression and make friends. Epic fail. It was like being the new school teacher who wanted to be friends with her students. Not good.

Victor, on the other hand, was a colleague of mine in another company, and we both worked for the same Training Manager, Lucy.

Victor was toxic to the team and the company. He complained about anything and everything and nothing was ever his fault. And, nothing ever got done right because he was always waiting on someone or someone was trying to sabotage him.

GET TRAINING FOR VICTOR!

Every chance he got, he talked bad about our boss and every other member of the team. According to Victor, who was a Training Specialist, he knew more because he once was a VP.

He thought he was an expert and people should listen because he was the expert. Those who didn’t were morons, in his opinion.

Thinking about him still brings on a feeling of heaviness because he brought so much negativity to the team. And, sadly, he was allowed to do so for several years before the issue was corrected.

Both Lynn and Victor were toxic to their teams. Their attitudes impacted more than just them. They impacted the team. Good leaders, however, can reverse the toxicity and build thriving teams.

GET TRAINING FOR LYNN & VICTOR!

To build a thriving team, we need to know what a thriving, results driven team looks like. It’s one where  every member of the training team pursues learning and growth as well as adapts to change and owns projects like a dog owns a bone. Team members have pride in their work and their team and the company.

It can be tough to right a ship that is off course but that is what we have to do to have a high performing, thriving training team. If the team is doing mediocre work, not growing, and not owning their work, you’ve got issues.

At some point, those issues will rear their ugly head and cause problems. So, what can you do about it before the team becomes mummified, obsolete or loses organizational credibility?

Well, what I should have done with Lynn, was to own my role as the director and as her direct report. I should have squashed that attitude in our very first meeting and Lucy should have dealt with Victor’s. Hindsight is always 20/20 though.

I have met other Lynn’s and Victor’s throughout my career, and you probably have or had a Lynn or a Victor on your team. You know the ones who think you don’t know what you’re doing or they can do it better or that they don’t need to do more than they already are.

Those people are bad for team morale. They make other team members uncomfortable when they see or hear them treat others poorly or talk negatively or don’t equally share the workload.

Low performers have perfected passing off work and not working as hard as other team members.

Those folks need to go or change ASAP.

Because I want to believe people are good and want to do good, I typically try to coach problematic team members before escalating my actions. I meet with them, go over the issues, explain how they impact the team, and give them 30 to 90 days to improve, depending on the issue.

If they are willing to work with me and have the right attitude, I’m in for the long haul. If they aren’t, they typically exit themselves pretty quickly because they don’t like being managed or coached in this way. Other times, you have to help them go.

When team members exit, with or without your help, your colleagues may wonder what is happening on your team. They may wonder if you’re the problem if more than one person goes or if you have a person on your team who likes to stir things up by moaning and groaning to everyone who will listen.

Just remember this, if you have team members who won’t work hard, who won’t learn new things, who won’t own their work, they are detrimental to the team. Period.

Lead from the Front

If your training team shows any of the signs of a mummified training team, here are some things you can do to course correct.

Your team looks to you, as the leader, to set the example of what is and isn’t okay. Conduct a personal check up to see where you fall with your attitude and commitment to the team.

Inspect what you have allowed to pass as acceptable behavior. Does it align with how you want the team to behave? Does it contribute to a thriving, results driven training team?

Coach those who want to be coached. Model the behaviors you want to see in your team. Provide opportunities for the team to learn and grow.

Opportunities to learn and grow can be team produced by allowing team members to teach the team new things.

Hold daily standups where every member of the team is held accountable for work and follow-up, including yourself. Set performance goals that align with your expectations.

And, finally, exit those who are not willing to learn, grow, adapt, own work, or support the team.

If you found this post interesting, please help me share it by pinning it, tweeting it, leaving a comment below, or posting it. Also, if you have a particular training challenge you are facing, share it in the FB group for some help.

Until we meet again, take care!

Master Remote Work & Leadership: 8 Tools You Should Know About
April 21, 2020

5 Ways to Maximize Your Investment in Training
February 25, 2020